Autumn is a time of increased mole activity in Europe, thanks to a tendency among the creatures to get busy about preparing for winter. Moles get to work fortifying their homes for the cold weather and collecting the necessary food supplies. If you see increased mole activity on your property in the next few weeks, please do not hesitate to call Pest Control Services in Newbury on 01635 250 852. 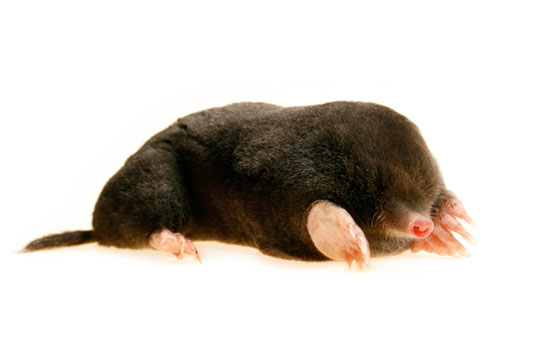 In light of increased mole activity in the autumn, we thought we would offer you five interesting facts you might not know about these intriguing creatures:

1. Moles Can See – There is a common myth that says moles are blind. Actually, they are not. Their eyes are very small and limited in terms of distinguishing colours and visual detail, but they can detect the difference between light and dark. Their noses make up for the limited vision they possess.

2. Moles Love Earthworms – A mole's diet typically consists of earthworms, beetles, and other insects. During the autumn months, they capture and store hundreds of earthworms to provide enough food for the winter. A mole will bite off the front end of the worm to prevent it from escaping, allowing the remainder to remain alive until consumed.

3. Moles Are Always Solitary – It is commonly understood that moles are solitary creatures living in individual tunnel systems. That is true most of the time, but not always. We have experienced scenarios in which several moles have been found living in the same tunnel system.

4. Females Can Produce up to 12 Babies – Female moles usually produce two litters annually consisting of as many as 3 to 6 babies. Births are observed between March and May, with each litter requiring a gestation cycle of just 30 days.

Moles are considered pests in the UK because of the damage their tunnelling systems can do. The resourcefulness of these animals also makes them difficult to get rid of. If you have moles on your property, Pest Control Services can help. We offer mole catching and termination services as well as training courses to help property managers learn how to control moles on their own.

Pest Control Services are the mole capture and termination experts in Berkshire. We offer service throughout the county, including Newbury, Thatcham, and Hungerford. Call us for same-day service provided by trained technicians with the skill and experience to handle the problem correctly.

Did you find this article useful/ helpful/ interesting? Perhaps you know someone who would enjoy reading it?
Here's the full link:- https://www.pestcontrolberkshire.com/blog/five-interesting-facts-about-moles